Miranda Paul’s Bedtime countdown, 10 Little Ninjas, was voted in January 2018 by preschoolers and kindergartners as the 2017 Missouri Building Block Picture Book Award winner. The book follows ten creative children as they sneak, creep, and tumble their way out of bed—with the hopes of making it all the way to Mom and Dad’s room. The artwork was created by Disney-Pixar animator and children’s book illustrator Nate Wragg.

The Missouri Building Block Picture Book Award, sponsored and selected by the Youth Services Community of Interest (YSCI), is presented annually to the author and illustrator of the picture book voted most popular by preschool children in Missouri’s public libraries and is designed to encourage reading aloud to children from birth through kindergarten age. According to Johnathan Shoff, Missouri Building Block 2017-2018 Awards Chair, over 18,000 kids voted this year. 10 Little Ninjas emerged as the winner by over 1,200 votes. The committee offered congratulations and thanked Miranda for “creating a book that resonates with so many children.”

10 Little Ninjas is available in hardcover through many online and in-store retailers nationwide, as well as in paperback through Scholastic Book Club Flyers and fairs. It will release in a new board-book format in June of 2018, which can be pre-ordered here. 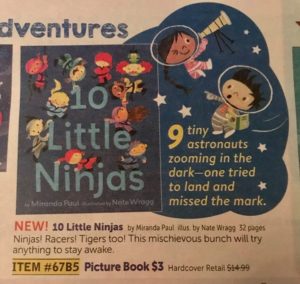 previous post: Meet Farmer Tantoh, Grassroots Environmentalist
next post: Are We Pears Yet? Receives Award of Excellence from CBHL